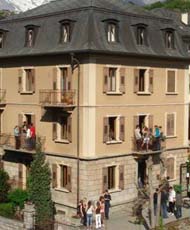 At the time of its opening in 1979, the direction of the ARDEVAZ College, Fabienne and Philippe Moulin, had fixed as a goal to make it possible for the local students to prepare in their province the national examinations of maturity – diploma giving the access to all the universities – and offer work to young professors.

These objectives seem to have been knowing that from this day several thousands of students were able to enter universities after their passage at the ARDEVAZ College and that the School offers work to forty collaborators. Considering the success obtained in the main campus (in Sion), the School opened classes at Martigny in 1984 and at Monthey in 1988. It is obvious, also, that many parents residing out of the province ofValais, entrust their child at the ARDEVAZ College. The confidence testified by the Authorities and the Parents throughout these years, and the brilliant results obtained with the official examinations make that the School enjoys a famous excellent. Moreover, at the time of the majority of the official exam sessions, the rates of success obtained by the students of Ardevaz are higher than 90% !

In 1997, Fabienne and Philippe Moulin launched out in a new challenge – to open on the world – with SLS College, a school of languages. SLS (School of language in Switzerland) accepted its first Asian students in January 1998. Since then, SLS receives, each year, more than one hundred of young foreign students. After their studies at SLS College, the most of them continue their formation in the Swiss universities !Ardevaz School is member of the Swiss Federation of the Private Schools (ESEP), of the grouping of the schools of Swiss maturity (GREM), of the Swiss grouping of the schools of the French baccalaureate (GSEB). The School is certified EduQua.