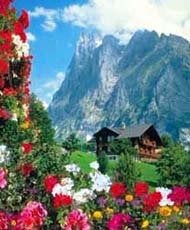 Switzerland may seem like a small island in the heart of Europe, but a closer look reveals an astounding variety in its scenery and its people. On the economic front, despite its size, Switzerland is among the leading exporting countries in the world.

The Swiss Confederation consists of: three geographical regions (the Jura mountains, the Plateau, and the Alps) ; twenty-six cantons which are small individual states, each one with its own specific culture and customs ; and four national languages (French, German, Italian and Romantsch).

Situated in the west of the country, the French-speaking part spreads from Geneva to Valais. The German-speaking area, which is also the largest, extends beyond the River Sarine which acts as a linguistic boundary. Italian is spoken south ot the Alps in the canton of Ticcino.

Valais is situated in south western Switzerland where it is completely surrounded by the Alps whose highest peaks reach to above 4000 metres. The canton stretches over a distance of 100 kilometres from the longest glacier in Europe to the world-famous Lake Geneva. Its climate is of a Mediterranean type : hot and sunny. In fact, Sion can claim to be one of the sunniest towns in Switzerland with in excess of 350 days of sunshine a year. The average temperatures vary between 1°C and 5°C in winter, 7°C to 15°C in spring and autumn, and from 17°C to 30°C during the summer.

The canton consists of the Rhone valley with its numerous chalets nestling in villages and hamlets on the mountainsides. But, it has also many glaciers, perennial snow and blue skies. It is both an alpine and a temperate region, rich with 5000 years of history and tradition.

Since the beginning of the century, industry has flourished in Valais, but tourism remains its principal economic activity with numerous opportunities for winter and summer sports. The region is a real paradise for tourists who will find a warm and enthusiastic welcome.

With its 30’000 inhabitants, the capital of Valais reserves a warm and friendly welcome for its guests in a historical setting which has charmed many a visitor.

Sion is well-known as a dynamic cultural centre with many museums, art galleries and exhibitions. Every summer, the town hosts several international musical events : the Tibor Varga Festival with its world-famous violin contest, a festival for ancient organs and one for Jazz fans, not to mention the many open-air plays and concerts.

At the heart of Valais, Sion is also a centre for excursions to numerous picturesque resorts which offer original and colourful aspects, such as : mountain guides, traditional folk costumes, « combats de reines » (a sort of contest of strength between local breeds of cows). The local tourist office also organises visits to a variety of interesting sites from spectacular dams in the mountains to vineyards and wine cellars in the valley. Finally, skiers and trackers can find some of Europe’s most famous Alpine ski resorts only a stone’s throw away.